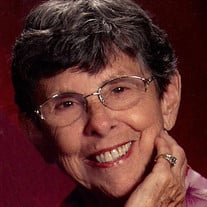 Adele Mitchell, age 92, was called home by her heavenly Father on June 25, 2021. Adele was the youngest of six girls, two of whom died in childhood, born to Henry Archibald Rogers and Nellie Poss Rogers of Thomson, GA. Adele grew up working on the family’s small dairy farm, hand-milking cows before school every morning until she left for college at the Georgia State College for Women in Milledgeville, GA. After receiving her teaching degree, Adele accepted her first position teaching high school history at Fernandina Beach, FL, where a tall, dark and demurely handsome math teacher named Frank began dating her roommate. Frank soon made it clear that his heart had been captured by fun-loving Adele instead and they married in 1953. Several moves were required for Frank to become certified as a laboratory technician and establish his new medical career, first to St. Louis, where Adele worked at the YWCA and enjoyed calling square dances. Then a move to Jasper, FL, where Cynthia Ellen was born in 1955 and Debora Ruth in 1957. Soon afterward, Frank was invited by Dr. Calvin Houpt, the father-in-law of Frank’s good friend, Dr. Buddy Strickland, to join him at the Doctor’s Hospital in Starke. Adele began teaching Physical Education at BHS and they built a small block house in a brand new subdivision called Green Acres. The Mitchell family cherished life in Starke for decades as Adele made many wonderful lifelong friends and later transferred to the Bradford Middle School where she taught Health until her retirement in 1986. After Frank retired, they enjoyed traveling extensively in their RV with their camping buddies and also numerous overseas adventures with friends. They moved to Seffner, FL in 2013 to be near their children and grandchildren. Frank passed on Christmas Day, 2018, and Adele continued to live in their Seffner house for two years, faithfully attending First Baptist Church, Dover, FL. She loved visiting her Starke friends whenever she could and was honored to receive recognition for her many years as a Bradford County Educator in August, 2019, at a ceremony proclaiming, “Adele Mitchell Day.” She was thrilled when many former students expressed to her how positively she had impacted their lives. Her life goal was always to help others. Adele and Frank were married 65 years and both graduated to heaven at the age of 92. Adele, known for her feistiness and vibrancy, truly lived life out loud. She leaves behind two devoted daughters, Cindy and Debbie, who both reside in Seffner, FL, a loving son-in-law, Chuck, 5 beloved grandchildren, 14 great grandchildren, and many nieces and nephews. Adele’s celebration of life will be held at 11:00 a.m. (viewing at 10 a.m.) on July 10 at First Baptist Church, Starke, where she was an active member for 50+ years. Interment will follow on July 12 at the Bushnell National Cemetery at 10:00 a.m. In lieu of flowers, donations may be made in Adele’s honor to First Baptist Church, Starke.

Adele Mitchell, age 92, was called home by her heavenly Father on June 25, 2021. Adele was the youngest of six girls, two of whom died in childhood, born to Henry Archibald Rogers and Nellie Poss Rogers of Thomson, GA. Adele grew up working... View Obituary & Service Information

The family of Mrs. Adele Rogers Mitchell 92 created this Life Tributes page to make it easy to share your memories.

Adele Mitchell, age 92, was called home by her heavenly Father...

Send flowers to the Mitchell family.