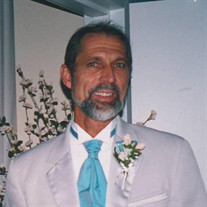 Arthur “Artie” Jerome Gordon of Keystone Heights passed away on Tuesday Jan. 5, 2021, after a brief illness. He was born April 8, 1955, in Jacksonville to Les and Betty Jo (Hagan) Gordon. The family relocated in 1959 to Miami. Les later married Carol (Moscoso) Gordon who became Artie’s mom also. Artie graduated from Southwest Miami High School in 1973. He immediately went into the construction business building high rises all over South Florida along with his dad, Les Gordon. Artie moved on to Tallahassee where he became a certified chef and ran several restaurants. In 1980 he married Stephanie (England) Gordon and they relocated back to Miami where Artie went back into the construction trade. He moved to Keystone Heights in 1996 to be closer to his extended family. Artie went to work as a project superintendent building Sonny’s BBQ restaurants all over the southeast and in 2004 joined Jim Temple Construction building custom homes until his health made him retire in late 2018. His passion was trim carpentry because he loved making things pretty. He also wouldn’t settle for anything less than perfection. He was a member of First Baptist Church of Keystone Heights and was involved in the Walk Thru Bethlehem from the start until he could no longer do it for health reasons and the younger generation took it over. Artie is survived by his wife of 40 years, Stephanie; his five sisters and one brother, Teresa (Billy) Konruff of Orange Park, Karen (Bob) Levine of Keystone Heights, Tamie (Terry) Cordoba of Callahan, Kevin (Laurie) Gordon of Cooper City, Chris (Richard) Strouse of Las Vegas, and Robin Hancock of Jacksonville. Artie was also uncle to numerous nieces, nephews and great nieces and nephews. He loved them all like they were his own. He also had numerous friends in his lifetime; no one was ever a stranger to him. No services are set at this time. Artie has requested cremation with his ashes to be spread over the waters in South Florida where he loved to fish. Arrangements are under the care of Jones-Gallagher Funeral Home, Keystone Heights. www.jonesgallagher.com 352 473-3176

The family of Mr. Arthur "Artie" Jerome Gordon 65 of Keystone Heights created this Life Tributes page to make it easy to share your memories.

Send flowers to the Gordon family.