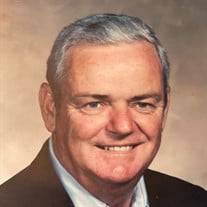 Dr. Bernard John McFadden, known by most as Barney or Bernie, passed away on March 15th, surrounded by his loving and dedicated family. Barney was born in Sharon PA on July 27th, 1930, preceded in death by his siblings: Mary Fran DeJohn, Ret. U.S. Army Maj. Gen. George L. McFadden, Edward (Ted) McFadden, John McFadden, Anne Lumpp, Margaret McCormick, Joseph McFadden, and Eugene McFadden, as well as son David Whitcomb. Dr. McFadden received his BA in Philosophy & Theology from The Pontifical College Josephinum in Columbus, Ohio before his ordination as a Catholic priest in 1956. Father McFadden served as Secretary to Archbishop Hurley for the Diocese of St Augustine, as Chaplain of Florida A & M University, Florida State University, University of Florida and the University of South Florida. He received his Masters degree in English Literature from Florida State University and his PhD in Humanities from the University of Rome. Father McFadden was a Founder and first President of Clearwater Central Catholic High School. He served as Vice President and Chairman of the English Department at Bishop Moore High School in Orlando, completing his Pastoral work as Pastor at St. Patrick's Catholic Church in Gainesville, FL. Father McFadden received his Papal dispensation in 1970. After completion of his ministry, Dr. McFadden served as the Chairman of Humanities at Edward Waters College until 1972. In 1972, he joined Santa Fe Community College as a professor of Humanities, English and Religion. From 1978 until his 1995 retirement, he was the Director of the Santa Fe College Guy Andrews Center in Starke, Fl. Dr. McFadden also served as the Vice President of the Starke Chamber of Commerce and as the President of the Starke Rotary Club. Later, he served on the Board of Directors for the Bradford Economic Development Corporation. In his retirement, he enjoyed spending time with his family, traveling the world, playing golf and cheering on his beloved Florida State Seminoles. He is survived by his loving wife, Georgiana McFadden, his sons Tim (Uyen) McFadden, Scott McFadden, Daniel (Vicki) McFadden, his daughter Kim McFadden Acimovic, and his grandchildren Riley McFadden, Sean McFadden, and Tyler Acimovic. The family has planned a viewing at Jones-Gallagher Funeral Home, Keystone Heights on Monday March 21st at 5:00pm, followed by the recitation of the Rosary at 6:00pm. Funeral services will be held at St. William’s Catholic Church on Tuesday, March 22nd at 10:00 AM. A brief burial service will follow at the Keystone Heights Cemetery. In lieu of flowers the family requests a kind donation in Mr. McFadden's name to www.americares.org

Dr. Bernard John McFadden, known by most as Barney or Bernie, passed away on March 15th, surrounded by his loving and dedicated family. Barney was born in Sharon PA on July 27th, 1930, preceded in death by his siblings: Mary Fran DeJohn, Ret.... View Obituary & Service Information

The family of Dr. Bernard John McFadden created this Life Tributes page to make it easy to share your memories.

Dr. Bernard John McFadden, known by most as Barney or Bernie,...

Send flowers to the McFadden family.