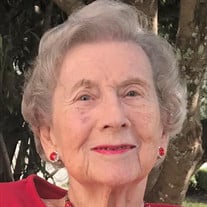 Billie Irene Thompson Milner, age 93, passed away peacefully on Friday, November 13, 2020 at UF Health Center in Gainesville, Florida after a brief illness. Billie had resided at Riverwood Health & Rehabilitation Center in Starke for the past two years after living with her son and daughter in law, Bob & Carol Milner. Billie was born in Jacksonville, Florida on September 26, 1927 to Alvin Newton Thompson and Jay Bodiford Thompson. She graduated from Andrew Jackson High school in 1945 and married Robert W. (Bob) Milner on June 7, 1947, a marriage that lasted 63 years until Bob’s death in 2009. Billie and Bob had their first 3 boys (Richard, Mark and Bob, Jr) while living in Jacksonville. The latter three (Kevin, Tony and John) were born while the family was living in the Cherry Lake community of Madison County. The family moved with Bob’s job at Gulf Life Insurance to Tallahassee for several years and then to Starke in December of 1968. Billie did not work outside the home until John was in middle school, having spent nearly 30 years raising her family. She was an excellent seamstress making most of the boy’s clothes when they were young as well as many majorette outfits for high school girls. She was an outstanding athlete who played women’s softball until her late 50s. Bob, Billie and the 3 younger boys moved back to Madison County in 1976 and then back to Tallahassee where she remained until moving to Starke in 2014. She was very active in her church and sang in the choir until after age 75. She was a gracious and giving southern lady who cooked for her husband and six boys before microwaves were invented. Billie worked for the Florida Department of Health for 15 years and then volunteered for many years at the Tallahassee Senior Center which she thoroughly enjoyed. She made her famous chocolate chip cookies for neighbors and anyone in need, as well as all of her grandchildren. Billie was preceded in death by her husband Robert W. (Bob) Milner, her 5th son Anthony S. (Tony) Milner; and her sister Mary Stafford Crabill of Jacksonville. She is survived by her 5 sons: Richard Milner of Harrison, Arkansas; Mark (Lynn) Milner of Tallahassee; Robert W. (Bob) Milner, Jr (Carol) of Starke, Fl.; Kevin (Heather) Milner of Green Bay, Wisconsin and John (Paula) Milner of Tallahassee. Also surviving are her brothers Tom Thompson of Vidor, Texas and James Thompson of Lake City, Florida and her sister Joann Bazzell of Union, SC. She also loved her 14 grandchildren and 16 great grandchildren. She was a member of Madison St. Baptist Church at the time of her passing. The family wishes to thank the dedicated and incredible staff of Riverwood H&R Center in Starke for their untiring care and love shown to Ms. Billie over the last two years. You have become our extended family. Due to the pandemic, a memorial service is not yet planned. A private interment is planned at Tallahassee Memory Gardens. In lieu of flowers, a memorial gift may be made in Billie’s honor to Madison St. Baptist Church, 900 W. Madison St, Starke, Fl. 32091. Expressions of love may be mailed to 1417 Debra St, Starke, Fl. 32091. Jones-Gallagher Funeral Home of Starke is in charge of arrangements.

Billie Irene Thompson Milner, age 93, passed away peacefully on Friday, November 13, 2020 at UF Health Center in Gainesville, Florida after a brief illness. Billie had resided at Riverwood Health & Rehabilitation Center in Starke for the past... View Obituary & Service Information

The family of Mrs. Billie Thompson Milner created this Life Tributes page to make it easy to share your memories.

Send flowers to the Milner family.