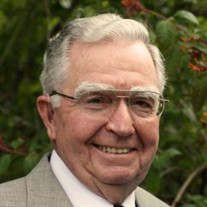 Calvin Ridlehoover, a wonderful husband, father, brother, and friend, died peacefully on July 21st at the age of 89 of Alzheimer’s disease. He was born February 10th, 1931 in Hollywood Florida to his loving parents Oscar and Esther. A proud graduate of South Broward High School class of 1949, Calvin then earned a degree from Lincoln Chiropractic College in Indianapolis after which served in the Army where he was an x-ray technician. Returning home to Hollywood from his military duty, he began his business as a chiropractor where a patient introduced him to Helen Gartin whom he instantly knew he would marry. It was truly love at first sight. Always a man of his word, they were married a short time later and their love remained strong for 64 beautiful years. He always said he was the luckiest man to have married the most beautiful woman in the world. He was the most loving and fun father to his three lucky daughters, Annette, Karen, and Monica in whom he instilled a deep love of learning, a strong work ethic, and an appreciation for the little things in life. After 17 years of working as a chiropractor he changed careers and proudly worked for Delta airlines for 20 years where he enjoyed the comradery with his coworkers who lovingly called him “Doc”. He used his Delta flying perks to take his family on wonderful vacations throughout the United States where they visited many national parks and natural wonders with Yellowstone National Park being his favorite. He moved to Starke 20 years ago and attended Grace Community Fellowship where he was a servant to all. A truly kindhearted man, Calvin never had a bad thing to say about anyone. He loved to laugh and could always be counted on to deliver the perfect one liner or (mostly appropriate) joke. He had a mischievous side getting his biggest laughs from a good scare and didn’t discriminate between people or cats when delivering a jump - worthy fright. Woe to the poor stray cat walking across a garden hose because Calvin was sure to be at the other end waiting patiently for the perfect moment to pull the hose making the cat jump high into the air. He just couldn’t help himself. His hobbies included kite flying, fishing, and woodworking. Most of all, Calvin loved helping others and enjoyed making wooden toys for nursery school children and oak rocking horses for family and friends. In his late 70’s, he helped build houses for Habitat for Humanity in Starke where people often commented that he outworked the much younger volunteers. He also enjoyed working as a poll worker for Bradford County for several years. Calvin was a true gem of a man and he will be missed by everyone who knew and loved him. Calvin is survived by his loving wife Helen, three daughters Annette Pusateri, Karen McRae, Monica Ridlehoover, 6 grandchildren and 5 great-grandchildren as well as his sister Dorothy Watson and many cousins, nieces and nephews. He is predeceased in death by his sister Mildred Ralphs and his granddaughter Brittany McRae. A celebration of his life will be held at a later date. Arrangements are by JONES-GALLAGHER FUNERAL HOME OF STARKE www.jonesgallagherfh.com

Calvin Ridlehoover, a wonderful husband, father, brother, and friend, died peacefully on July 21st at the age of 89 of Alzheimer&#8217;s disease. He was born February 10th, 1931 in Hollywood Florida to his loving parents Oscar and Esther. A... View Obituary & Service Information

The family of Mr. Calvin G. Ridlehoover created this Life Tributes page to make it easy to share your memories.

Send flowers to the Ridlehoover family.