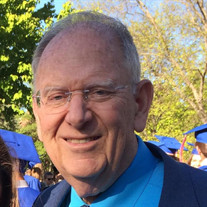 Cliff Weber, resident of Keystone Heights, FL, was taken peacefully to his heavenly home on Saturday morning, November 28, with his wife, Diane, by his side. Cliff and Diane were married for 26 years after both had been widowed. Over the years they opened their home to many people and enjoyed relating remarkable similarities in their families—such as each having two sons and two daughters around the same ages. Together, Cliff and Diane have 27 grandchildren and three great-grandchildren. Cliff grew up in Amityville, NY, moved to Fort Lauderdale in high school, and graduated from Wheaton College in 1962 with a BA in Mathematics. After college he served in the military intelligence branch of the U.S. Army. Later he completed a master’s degree in New Testament Theology, writing his thesis on teaching and shepherding in the local church. Cliff and his first wife, Mary, raised their family in Raleigh, NC, where Cliff taught math at Sanderson High School and particularly enjoyed teaching Calculus. At Falls Bible Chapel (which later became North Ridge Bible Chapel), Cliff served as an elder and also ministered through preaching and leading music. Cliff & Diane were married in 1994 and moved from Raleigh to Satellite Beach, FL, in 1999. Cliff served on the Board of Directors for Park of the Palms for several years until they moved to the Park themselves in 2009. In 2008, Cliff began a journey punctuated by many difficult medical challenges, starting with a diagnosis of laryngeal cancer and surgical removal of most of his vocal cords. Over the last decade, with every challenge, Cliff refocused energy toward abilities that remained. Though he mourned the loss of singing, as an accomplished pianist he was able to continue accompanying hymns at Park of the Palms Church. He served as an elder there as well. Always enjoying the challenge of math calculations, Cliff volunteered with H&R Block to help many Park residents with tax preparation. Cliff will be buried in Raleigh, North Carolina, beside his first wife. A full obituary and memorial service information may be found at www.MitchellatRMP.com Arrangements are by JONES-GALLAGHER FUNERAL HOME, 340 E. Walker Dr., Keystone Heights, FL 32656. (352)473-3176. www.jonesgallagherfh.com

Cliff Weber, resident of Keystone Heights, FL, was taken peacefully to his heavenly home on Saturday morning, November 28, with his wife, Diane, by his side. Cliff and Diane were married for 26 years after both had been widowed. Over the years... View Obituary & Service Information

The family of Mr. Clifford Arthur Weber created this Life Tributes page to make it easy to share your memories.

Send flowers to the Weber family.