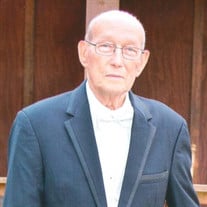 Mr. Delmas B. “D.B.” Whitehead, Jr. age 93 of Keystone Heights passed away at Custead Hospice Care in Orange Park January 30, 2022. He was born November 25, 1928, in Augusta, Georgia to Delmas and Louise (Helmly) Whitehead, Sr. where he was raised until his teenage years. As a teenager his family relocated to Charleston, South Carolina where he graduated from Porter Military Academy June 4, 1946. In March of 1947, he then joined the Marine Corps. During his boot camp obligation he excelled in numerous sporting events, softball and track and received the U.S.M.C. Leatherneck award for top marksmanship in his platoon. After his graduation from boot camp in Parris Island, he was offered a position as rifle instructor on the Marine Corps firing range. Following his obligation in the military he met his first wife (Katherine) and relocated to Jacksonville. In 1950 he began his career with Tom’s Peanut Company, retiring 45 years later in 1995 as their distribution sales manager. Following his retirement he and his wife (Doris) relocated to Keystone Heights where he became very involved with Amvets Post 86. His most memorable and cherished time was spent serving on the Amvets Honor Guard for 25 years, and volunteering at the Lake City Veteran’s Hospital Domicile for veterans birthdays and veteran holidays. Other activities consisted of volunteering for BINGO where he was known as the “BINGO Police” maintaining order for the ladies! Other events he thoroughly enjoyed was the annual Turkey Shoot, he enjoyed Cow Patty, Horse Race, and other various fundraisers. He was a member of the V.F.W. and longtime member and leader of the Boy Scouts of America. He also earned his Eagle Scout Award in 1965. Mr. Whitehead was an avid fisherman, and enjoyed the outdoors. He was a dedicated father and husband who loved his family and his country. In addition to his parents, he was also preceded in death by his first wife Katherine (Kinlaw) Whitehead and the love of his life of 35 years, Doris (Bragg) Whitehead, son Mike Whitehead, stepson Vaughn Register, stepdaughter Debra Register, and one grandson Robert Register. He is survived by his son Wayne Whitehead, Sr. of St. Augustine; stepdaughter Donna George of Jacksonville and stepson Chris Register of Keystone Heights. He was also lovingly called “Papa” by nine grandchildren, eighteen great grandchildren and two great-great granddaughters. A memorial service for Mr. Whitehead will be held Monday, March 28, 2022, at 2:30 p.m. at Jacksonville National Cemetery. A Celebration of Life will be held at 2:00 p.m., Sunday, April 10, 2022, at Amvets Post 86, Keystone Heights. Please omit flowers and make a memorial donation to Amvets Post 86, 6685 Brooklyn Bay Rd, Keystone Heights, FL 32656. Arrangements are by JONES-GALLAGHER FUNERAL HOME, 340 E. Walker Dr., Keystone Heights, FL 32656. (352)473-3176. www.jonesgallagherfh.com

The family of Mr. Delmas "D.B" Baxley Whitehead Jr.age 93 of Keystone Heights created this Life Tributes page to make it easy to share your memories.

Send flowers to the Whitehead family.