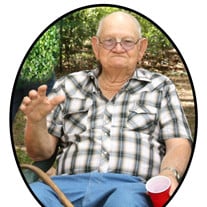 Mr. Dyal W. Baldree age 91, of Keystone Heights passed away Thursday, January 23, 2020, at Willey Manor. He was born August 19, 1928, in Avon Park to Robert C. and Florida Skipper Baldree and had served two years in the United States Army during the Korean War. Mr. Baldree had been a longtime resident of the Keystone Heights area and retired as a shift supervisor from E. I. DuPont where he was employed for many years. As a child he grew up on a farm and later became a cattleman. Mr. Baldree was a longtime member of the First Baptist Church in Keystone Heights and always looked forward to having breakfast every morning with his friends at Hardee’s. Mr. Baldree was also known for having yard sales as well as going to them. In addition to his parents he was also preceded in death by his first wife Alma Coleen Baldree; siblings Detha Hickey, Bobby Baldree and Charles Baldree along with two stepchildren Larry Ricks and Linda Ricks Gordon. Mr. Baldree leaves behind a son Robert Baldree of Merritt Island; a granddaughter 2nd Lieutenant Beth Gordon (Adam) and two great grandchildren Cole and Charlotte Gordon all of Great Falls, Montana; three step children Sylvia Wheeler of Lawtey, Doris Overstreet of Keystone Heights and Joey Ricks of Belize along with numerous nieces, nephews, step grandchildren and a host of extended family members and friends. Also left behind is his longtime friend Mary Foster of Keystone Heights. Viewing for Mr. Baldree will begin at 10:00 a.m., Monday, January 27, 2020, in the First Baptist Church with funeral services beginning at 11:00 a.m. Pastor Daniel Findley will be officiating and interment will immediately follow at Gadara Cemetery. In lieu of flowers donations can be made to Community Hospice 2466 Sunbeam Road, Jacksonville, FL 32257. Arrangements are by JONES-GALLAGHER FUNERAL HOME, 340 E. Walker Dr., Keystone Heights, FL 32656. (352)473-3176. www.jonesgallagherfh.com

The family of Mr. Dyal Wade Baldree, age 91, of Keystone Heights created this Life Tributes page to make it easy to share your memories.

Send flowers to the Baldree family.