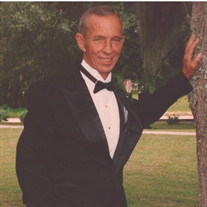 Mr. Edgar George Akridge 85 of Keystone Heights passed away at his home Monday, August 2, 2021. Edgar was born February 22, 1936, in Douglas, Georgia to Broward and Mary (Giddens) Akridge. Mr. Akridge worked many years for his father’s company Akridge Taxi Service in Stake before beginning his 37 year career as a Residential Electric Meter Reader for Clay Electric. He would proudly say he was from Bradford County. He was a Parishioner of St. William Catholic Church, the Free Mason and served in the National Guard. His contribution to the community was his love and passion for the game of baseball. He was one of the original members and leader of the KH Community and KRA organization establishment from the very start which led to him coaching many young boys. He taught skills they could use on the field and off. Life lessons that many still use today in their own lives. He was a fan of the New York Yankees and Kentucky Wildcats Baseball teams along with every sport played by the Florida Gators. He also enjoyed fishing and boiling peanuts for family and friends. Edgar also had a love for music and especially the King of Rock and Roll, Elvis Pressley. From time to time if you were lucky you might catch him and Denise dancing to “Blue Suede Shoes”. He was also a fan of his grandson Cody’s voice and at times said he was better than the king himself. Lastly, Edgar never met a stranger and always treated others with genuine kindness and care. To know him was to love him and in turn he would love you. But most of all, Mr. Akridge was a loyal, dedicated and loving husband, father and Papa. In addition to his parents he was also preceded in death by his son Edgar Scott Akridge; a twin brother Edward Washington Akridge his fishing partner and best friend; siblings E.L. Akridge, Dick Akridge and Eula Mae Crews. Mr. Akridge survivors are his loving wife of 57 years Denise (Smart) and their four children Valerie Akridge Alvers (Rick), Mary Akridge, Eric Paul Akridge and Celena Julius (Ryan); two brothers Emmett Akridge and Alan Akridge along with three sisters Alma Packham, Elaine Crawford and Jean Readydough. He was lovingly called “Papa” by his grandchildren Cody, Tyler, Austin, Lauren, Nolan and Haley and great grandchildren Aaralyn, Laney, Baylor, Karter, Lyla and Brooklyn. The family will receive friends Thursday, August 5, 2021, at Keystone Heights Cemetery beginning at 10:00 a.m. The Graveside Mass will begin at 10:30 a.m. with Father Mike Williams presiding. In lieu of flowers memorial donations can be made to Community Hospice 4266 Sunbeam Rd. Jacksonville, FL 32257.Arrangements are by JONES-GALLAGHER FUNERAL HOME, 340 E. Walker Dr., Keystone Heights, FL 32656. (352)473-3176. www.jonesgallagherfh.com

The family of Mr. Edgar George Akridge 85 of Keystone Heights created this Life Tributes page to make it easy to share your memories.

Mr. Edgar George Akridge 85 of Keystone Heights passed away at...

Send flowers to the Akridge family.