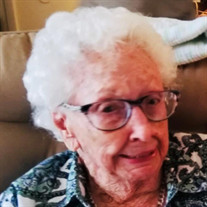 Esther Merritt Riviere was born on March 27, 1917, to Thomas Rhett and Mamie Seymour Merritt. Esther spent most of her young life in Jacksonville, Florida. She married Walter E. Riviere, Sr. and they had one son, Walter E. Riviere, Jr. “Wally”. Walter and Esther enjoyed living in many areas of the U.S. including several Florida cities; Jacksonville, Keystone Heights on Lake Santa Fe, Jacksonville Beach, Sebring, and Dade City. They also lived in other states, Georgia, Virginia, and Arizona during their married life. Esther was actively involved in several organizations including the Garden Club and the Order of the Eastern Star. Esther was an adventure lover and enjoyed exploring America in an Airstream trailer with a travel club as well as cruising the seas and riding the train rails across the country. Esther later pursued a nursing career at the age of 40 and worked in the medical profession for many years. In her retirement years, she and Walter continued to travel until they settled back in Jacksonville, FL to live closer to their family. Esther was of the Presbyterian faith and had many hobbies including crewel embroidery, tapestries, ceramics, playing cards and bingo. She thoroughly liked pulling out photo albums and sharing stories of their travels with her family and friends. Her traveling memories were truly her most fond. Esther was predeceased by her husband of nearly 70 years, Walter E. Riviere, Sr., her only son, Walter “Wally” Riviere, Jr., and two great-grandchildren, Terry P. Hamlett and Chelsea E. Hamlett. Esther is survived by a sister, Betty Merritt Williams, her four grandchildren, whom she was most proud; Hollie Hamlett Miller (Mark), Beau Riviere (Julie), Charlie Riviere, and Tim Riviere (Becky); 13 great grandchildren, and 10 great-great grandchildren, along with many nieces and nephews. A private family burial will take place for Esther in Rochelle, GA. In lieu of flowers donations may be made to the: Sunny Shores Sea Camp, Ed Loos, Esq. c/o Greenspoon Marder, 201 East Pine Street, Orlando, FL 32801, in memory of Chelsea E. Hamlett. Arrangements are being handled by JONES-GALLAGHER FUNERAL HOME, 340 E. Walker Dr., Keystone Heights, FL 32656. (352)473-3176. www.jonesgallagherfh.com

The family of Mrs. Esther Merritt Riviere age 103 of Jacksonville created this Life Tributes page to make it easy to share your memories.

Send flowers to the Riviere family.