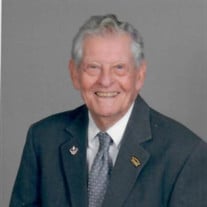 Judge George Hinton Pierce passed peacefully in his sleep Monday morning, September 13, 2021 after a brief stay at North Florida Regional Hospital. Judge Pierce, currently of Gainesville, was a long-time practicing attorney, County Judge, and Senior Judge of Bradford County. Judge Pierce was born in Opp, Alabama on August 3, 1931 to George Dewey and Kitty Mae Pierce. After attending grade school in Live Oak, George moved with his family to Pompano Beach where he graduated from Pompano Beach High School in June 1949. From August 1949 to December 1952 George proudly served in the United States Air Force where he was involved in the Korean War. He was honorably discharged as a Staff Sergeant with 4 Bronze Battle Stars and several citations and medals. On January 18, 1953 George married Gladys Cartwright of Cleveland, Tennessee. They subsequently moved to Gainesville where George attended the University of Florida, graduating in 1956 with a Bachelor of Science degree in Business Administration. The Peirce’s then moved to Lebanon, Tennessee where George attended and graduated from Cumberland Law School in 1958. Returning to Gainesville, George was employed by the law firm of Scruggs, Carmichael, and Avera until December of 1959. At that time, the Pierce’s moved to Starke where George began a practice with A.J. Thomas, Jr. He served as Bradford County Attorney and Prosecutor for three years, Bradford County School Board Attorney for two years, and City Attorney for Starke, Brooker, and Hampton for 20 years. In December of 1981 he was appointed to the bench as Bradford County Judge by Governor Bob Graham. Judge Pierce served unopposed until his retirement in 1994. From January 1995 to September 2007 Judge Pierce served as a Senior Judge in various Circuits. Named an outstanding Floridian in 1971, George served on the Santa Fe Community College Endowment Board for 25 years. Judge Pierce also served on various Florida Bar Association committees being Vice President of the 1st District, President of the 8th Judicial Circuit, and Vice President of the Conference of County Judges. He was past president of the Bradford County Chamber of Commerce and Starke Rotary, past Commander of Post 56 American Legion, life member of the Free & Accepted Masons Lodge #35 in Starke, Scottish Rite and York Rite Bodies of Masonry. George was preceded in death by his parents and sister, Francis Pierce (Govan) Smith of Live Oak, He leaves behind his loving wife of 68 years Gladys; his daughter, Lynn (Jay) Godwin of Gainesville and son, Rob (Molly) Pierce of Cleveland, Tennessee. He also leaves 5 grandchildren: Jordan (Whitney) Pierce of Ooltewah, Tennessee and Claire Pierce of Knoxville, TN; and Jacob Godwin, Thomas Godwin and Grant Godwin of Gainesville; and three great grandchildren: Carter, Catherine and Caroline Pierce all of Ooltewah, Tennessee. Numerous nieces, nephews, cousins, family, and extended family will miss their Uncle George (Poppy). A man of service and distinction, the Hon. George H. Pierce will be missed. A loyal and faithful member of the First Baptist Church of Starke, George has gone Home to be with his Lord and Savior Jesus Christ. The family will receive friends at the First Baptist Church of Starke on Saturday, September 18, 2021 from 9:30 am to 11:00 am. Funeral services will follow visitation and will start at 11:00 am, interment will immediately follow in Crosby Lake Cemetery. In lieu of flowers contributions may be made to 1st Baptist Church General Fund, P.O. Box 1258, Starke, FL 32091 or a charity of choice. Arrangements are by JONES-GALLAGHER FUNERAL HOME OF STARKE 904-964-6200 www.jonesgallagherfh.com.

The family of Judge George Hinton Pierce created this Life Tributes page to make it easy to share your memories.

Send flowers to the Pierce family.