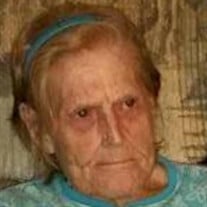 Mrs. Grace &#8220;Juanita&#8221; Ferguson age 91, of Starke passed away Wednesday, June 22, 2022 at Riverwood Health and Rehab in Starke. Juanita was born on October 3, 1930 in Starke to James and Mildred (Browning) Higginbotham and was a longtime... View Obituary & Service Information

The family of Mrs. Grace "Juantia" Ferguson created this Life Tributes page to make it easy to share your memories.

Send flowers to the Ferguson family.