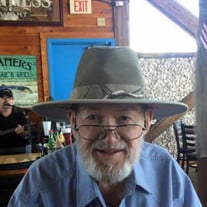 Harley Lloyd Hazen of Starke FL, passed away at his home on Monday, June 22, 2020 after a long battle with Parkinson's Disease. He was 82 years old. Affectionately known as Johnny by some, he was born on October 29, 1937 to parents, Joseph Franklin and Martha Alice Dillard Hazen in Graham, FL and was a lifelong resident of Bradford County. Although he and his late wife Betty built and lived in their lake home in Keystone Heights for 30 years, they always kept the farm where he was raised in Starke and in 2006 they built their present home there. Before ill health caused them to sell, they enjoyed their time with family and friends at their cabin in Maggie Valley, NC. Harley was an avid hunter and outdoorsman. He was a 43 year contributor and member of the Florida Sheriff's Youth Ranch, a lifetime member of the NRA and in his younger years made blood donations regularly. He loved to travel and always made sure that he saved half of his vacation time for his family. Of course anyone who knew him knew the other half was reserved for hunting. Harley loved his wife and family dearly and they adored him. He was a hard working man and retired as an Electrical Lineman Supervisor. Harley is preceded in death by his parents; his wife Betty Norman Hazen; his sisters, Caudie, Irene, Arlene and Vivian; his brothers, Owen Franklin, David and Freddie and his granddaughter, Sarah Dianne Rewak. He is survived by his daughters, Julie Catherine(Brian)Baldwin of Starke, FL and Vickie Dianne(Clay)Watson of Trenton, FL; his brother, Albert Hazen of Morgantown, WV; his granddaughters, Raye(Casey)Dopson, Carrie Rewak Williams, Brandyn(Matthew)Barksdale, Jordanne(Scott)Jones and Shayne(William)Burgin; his grandson, Stephen Harley Typhoon Crews; his brothers-in-law and their families who were there for him until the end, Gene(Jean)Norman and Ronnie(Corkie)Norman of Lawtey, FL and 12 great-grandchildren. Harley was laid to rest next to his beloved Betty at a private family ceremony at Dyal Cemetery on July 19, 2020. The family will be receiving friends at Jones-Gallagher Funeral Home in Starke, FL on Sunday, November 1, 2020 from 2:00 until 4:00 in the afternoon.

Harley Lloyd Hazen of Starke FL, passed away at his home on Monday, June 22, 2020 after a long battle with Parkinson's Disease. He was 82 years old. Affectionately known as Johnny by some, he was born on October 29, 1937 to parents, Joseph Franklin... View Obituary & Service Information

The family of Mr. Harley Lloyd Hazen created this Life Tributes page to make it easy to share your memories.

Harley Lloyd Hazen of Starke FL, passed away at his home on Monday,...

Send flowers to the Hazen family.