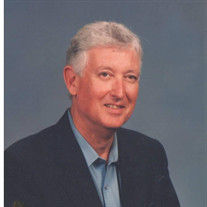 James W. (Jim) Gill, Jr. died Monday, November 29, 2021, after a long illness. He was born May 16, 1932, in Oklahoma City, Okla. to Sarah and Jimmie Gill. Jim was raised in Jacksonville, attending Central Riverside, John Gorrie, and Robert E. Lee High School, graduating in 1950. During these years he was a Boy Scout, achieving the Eagle rank. He amended the University of Florida for two years; then completed pilot training at Pensacola Naval Air Station, electing to serve in the Marine Corp. He was stationed at the Opa-locka, FL Marine Air Station. His squadron soon left for the Mediterranean aboard the carrier Lake Champlain for a six-month deployment. During training at Norfolk, VA, he had met his future wife JoAnne, vacationing from Ohio. They were married May 26, 1956, in Canfield, Ohio, when he returned from deployment. After completing his service, Jim finished his education, graduating from the Univ. of Florida in 1959. His business career was as a financial consultant/stock broker, working for several firms in Jacksonville, retiring from Prudential. In 1979, the family moved from Jacksonville to the Keystone Heights/Melrose area, building a home on Lake Santa Fe. Jim then began his “volunteer years” serving as a deputy with the Bradford County Sheriff's Department, working mainly in the schools, for over 20 years. He was a long-time member of the Community Church of Keystone Heights, serving on the Executive Board; also member and past president of the Keystone Rotary Club. He was a supporter and Board Member of the Florida Sheriffs Youth Ranches and of the Cadet Program at Camp Blanding; also a founding member of the Santa Fe Lake Dwellers Assn. Besides his wife of 65 years, he leaves a son and daughter-in-law, Matthew Robert and Leni Seaton Gill of Alpharetta, Georgia; a daughter and son-in-law DiAnne and Marc Jamerson of Melrose; three grandchildren, Christina Burchfield Adkins (Wes) of Florahome; Derick Matthew Gill (Shannon) of Alpharetta, Georgia, Taylor Gill Solomon (Chase) of Atlanta; three great-grandchildren, Zaiden Adkins of Florahome, Penelope and Daphne Gill of Alpharetta. He was predeceased by his parents and a sister, Sarah Gill Giddings. A Celebration of Life will be at 2:00 p.m. Sunday, December 5th , at Community Church of Keystone Heights. A Reception will follow in the Family Life Center. Please omit flowers and make a memorial donation to the Florida Sheriff’s Youth Ranch or the Salvation Army. Arrangements are under the care of Jones-Gallagher Funeral Home, 340 E. Walker Dr. Keystone Heights, FL 32656. (352) 473-3176. www.jonesgallagherfh.com

The family of Mr. James "Jim" William Gill Jr. 89 created this Life Tributes page to make it easy to share your memories.

Send flowers to the Gill family.