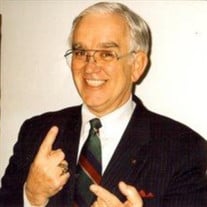 James F. (Jim) Hollingsworth II James F. (Jim) Hollingsworth II, 79, peacefully entered paradise on August 25, 2021, at home in Tallahassee. He was born in Gainesville, FL, on October 27, 1941, to James F. Hollingsworth, Sr. and Mildred Hollingsworth Rooksberry. Jim was graduated from Bradford County High School in Starke, FL, and was a graduate, cum laude, of Abilene Christian University. Jim is survived by Theresa Thomas Hollingsworth, his beloved wife of 59 years; sons Jay F. Hollingsworth III of Millbrook, AL, and Mark Hollingsworth (Kathleen) of Tallahassee; grandchildren James F. Hollingsworth IV (Kat) of Luverne, AL, and Sabrina Mills (David) of Prattville, AL; greatgrandchildren Maverick Hollingsworth and Trace Mills of Prattville, AL, and James F. Hollingsworth V of Luverne, AL; step greatgrandchildren Gabriel and Katie. Jim first came to Tallahassee in 1982, as sales manager of WTWC, new NBC TV affiliate. Gifted with a marvelous sense of humor, he spread joy, optimism, and enthusiasm in his considerable travels. As a pulpit minister, excellent teacher, and motivator, Jim practiced the Biblical admonition to "...stir up one another to love and good works." (Heb. 10:24). He said "if you have enthusiasm, thank God for it. If you don't have enthusiasm, get down on your knees and ask God for it." He preached regularly for four congregations--including his "home" Timberlane church of Christ in Tallahassee--and as a volunteer for scores of churches in small communities. He eagerly did mission work in the USA and four foreign countries. In Rostov, Russia, he taught university professors and others English from the Bible, and in one 12-hour period baptized Russian believers on two continents (Europe and Asia). Earlier, as a talented broadcaster, he did sales and reported news and weather for eight radio stations and four television stations, and created sales and writing for four newspapers and magazines. (He said he stopped weather forecasting because "the weather wouldn't agree with me") His media experiences opened the door for interviews and encounters with Aerospace Engineer Wernher von Braun, President George H. W. Bush, Billy Graham and a host of Governors and entertainment celebrities. He created and taught a motivational "Do It Right" sales, marketing, and time management seminar throughout the southeastern United States and Texas. In Abilene, TX, he coordinated a nationally-syndicated network religious radio program for Herald of Truth. Later, he excelled in an 18-year career (1988-2006) as a field representative and area manager for Woodmen of the World. He served as president (1993-94) of the National Association of Fraternal Insurance Counselors, and was an active member of Tallahassee's Woodmen Chapter 2 for 37 years. Jim served in the U.S. Army stationed at the South Korea demilitarized zone. Over time, he developed interests in travel, reading, photography, and motivating seniors to embrace life, learning, and abundant living as modeled by Jesus. He and Theresa were co-coordinators of the Golden Triangle, their Timberlane church seniors group that had an incredible impact in serving children, veterans, and the sick and hurting. All of his days, Jim Hollingsworth followed the Apostle Paul's reminder that, like Christ, we should not be concerned about being served, but find ways to serve others. Memorial services will be scheduled at a later date. Friends may wish to send a memorial contribution to Christian Family Services, 2720 S.W. 2nd Ave., Gainesville, FL. 32607 https://www.paypal.com/donate?hosted_button_id=DHMVB8ZWWST3W or Big Bend Hospice, 1723 Mahan Center Blvd, Tallahassee, FL, 32308. Arrangements are under the care of JONES-GALLAGHER FUNERAL HOME, 620 E. Nona St., Starke, FL 32091. (904) 964-6200.www.jonesgallagherfh.com

The family of Mr. James "Jim" F. Hollingsworth II 79 of Tallahassee created this Life Tributes page to make it easy to share your memories.

Send flowers to the Hollingsworth family.