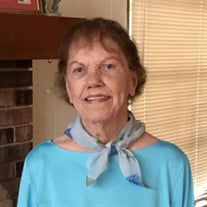 Our beloved Jean passed away at the age of 96 on April 16 after a brief illness. She was born Jane Marie Morris on November 29, 1923, in Philadelphia, but her parents soon settled in Hatboro, Pennsylvania. As the eldest daughter in a family of seven children, Jean helped her mother Elizabeth in caring for the younger ones. Throughout her long life, Jean remained the cherished big sister of Betty Stubbs (of Keystone Heights) and Helen Kelley (of Orange Park). After graduating from Hatboro High School, Jean took a secretarial course, which led to the job that introduced her to a handsome Navy man, Joseph Carl Petty. She and Joe married in January of 1945 and soon had three children - Joseph Carl, Jr. (Patricia), Vicki Jean, and Susan Lynne. Jean was always proud of being a Navy wife and recalled packing up the house and the kids when Joe was transferred to Washington, D.C., Boston, Norfolk, and Key West. It was there they had a fourth child - Maureen Elizabeth - and Joe began his second career as a stock broker. Jean's Key West years revolved around the Officers' Wives Club, the library at the Convent of Mary Immaculate (where her daughters attended school), and the Naval Hospital, where Jean worked as the secretary to the commanding officer. She loved her island life, which was filled with friends, weekend boat trips on Jo-Jo's Pest, and endless hours watching her children cannonball into the pool on the Naval Base or swim in the ocean off Fort Taylor Beach. In the fall of 1980, Jean and Joe moved to their lakeside home in Keystone Heights. They wanted to be closer to Jean's two sisters and two their son Joe, who was in Gainesville with his young family. Jean continued her secretarial career at the Naval Base in Jacksonville. When she retired, she did not slow down, but instead, devoted herself to playing bridge and volunteering. She was a founding member of AMVETS Post 86 in Keystone and was president of the Ladies' Auxiliary. She also assisted patients at the VA Hospital in Gainesville for over twenty years. When people marveled at her energy and asked her secret, she would smile and reply, "Always take the stairs!" As the years passed, Jean enthusiastically kept up with her far-flung family through phone calls and daily checks on Facebook. Her son Joe lives nearby and his regular visits were real highlights for her. Jean is lovingly remembered for her independent spirit, her strong will, her well-informed opinions, and - being an avid bird watcher - her colorful hummingbird tattoo! She is preceded in death by her dear husband Joe and her beloved daughter Maureen. She is survived by her sisters Betty and Helen, her children Joe Jr. (Patricia), Vicki and Susan, seven grandchildren, 15 great-grandchildren, and innumerable friends. All feel lucky to have had her for so long. Arrangements are under the care of JONES-GALLAGHER FUNERAL HOME KEYSTONE: 352-473-3176

Our beloved Jean passed away at the age of 96 on April 16 after a brief illness. She was born Jane Marie Morris on November 29, 1923, in Philadelphia, but her parents soon settled in Hatboro, Pennsylvania. As the eldest daughter in a family... View Obituary & Service Information

The family of Mrs. Jane "Jean" Marie Petty created this Life Tributes page to make it easy to share your memories.

Send flowers to the Petty family.