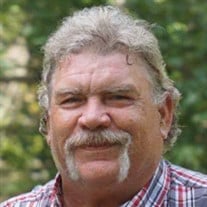 Mr. Jimmie William “Bo” Clark, Jr, age 62, of Starke passed away Saturday, January 15, 2022 at Shands UF in Gainesville. Jimmie was born on September 25, 1959 in Bradford County and was a lifelong area resident. He graduated from Bradford High School and played football for the University of Florida in 1977 and 1978. He was a member of Madison Street Baptist Church and the Lawtey Masonic Lodge. Prior to retirement he worked as an investigator for the Florida Department of Corrections, and for the last twelve years has worked for Sears in Starke. Preceding him in death was his son, Jason L. Clark, father, Jimmie William Clark, Sr. and his sister, Polly LuAnn Clark. Survivors are, his wife of 36 years, Josephine “Jo” Clark of Starke, children, Tisha Calderin (Michael) of Starke, Jimmie W. Clark, III (Allyson) of Starke, his mother, Linda (McRae) Clark Spivey (Bill) of Starke, brothers, Clayton Clark of Starke, Johnnie Clark of Starke, and Dane Clark of Hampton. Also left are his grandchildren, Kenneth (Taylor), Morgan, Natalie, and Chason along with his great grandchild, Shiloh and many nieces, nephews, and others that knew him as “Uncle Bo”. The family will receive friends at Madison Street Baptist Church from 1:00 pm to 2:00 pm on Thursday, January 20, 2022. Funeral services will follow at 2 o’clock with Reverend Charles Warren and Reverend Richard Cason officiating. In lieu of flowers the family requests contributions be made to his beloved Tornado football team through the Tornado Touchdown Club, 620 N. Thompson Street, Starke, FL 32091. Arrangements are by JONES-GALLAGHER FUNERAL HOME OF STARKE 904-964-6200 www.jonesgallagherfh.com

The family of Mr. Jimmie "Bo" William Clark Jr. 62 of Starke created this Life Tributes page to make it easy to share your memories.

Send flowers to the Clark family.