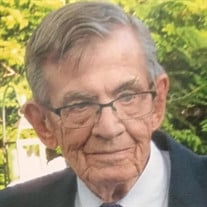 John N. Wheeler, Jr. was his given name but was always called “Pete!” On June 21, 2021, Pete peacefully passed away with his wife at his side at Ormond Manor. Pete was born and raised in Bronxville, NY, graduated from Dartmouth College and received a graduate degree many years later from Stetson University. Drafted in the U.S. Army, Pete always spoke of his being stationed in Orleans, France for 2 years, a short drive from Paris, as being a perfect place of duty. Upon discharge, Pete came to visit his sister at Syracuse University. While there he met his sister’s friend, Sue Dillingham. They married a year later and would have celebrated their 62ndanniversary this June 27th. Moving to Irvington on Hudson, NY, Pete and Sue raised their three children. Pete worked with his Dad at the JN Wheeler Co in NYC for many years. In 1980, Pete and Sue moved to Ormond Beach. With much support and encouragement, Pete went back to college after 30 years and earned an advanced degree from Stetson University. Pete started a new career as a psychotherapist, a path he was truly meant to follow. His incredible accumulation of a wide range of knowledge, love of books and fascination of how people and things worked coupled with his genuine ability to listen resulted in him helping many people. His kitchen table therapy also was a help to many, young and old. Pete’s 44 years of sobriety with the help of AA, was one of pride and devotion. Pete is survived by his wife, Sue (Dillingham) Wheeler of Ormond Beach, son, Peter Wheeler (Anne) of Chapel Hill, NC, and daughters, Robin Gallagher (Peter) of Lowell, MA and Holly Dubin (Marc) of Grasonville, MD. Pete loved being a grandfather to his nine grandchildren: Katie, Allison, Colin, Brett, Jack, Madeline, Teddy, Sam and Nick. He was a teacher, a helper, and of course a very willing listener to all nine, loving them equally, unconditionally and was so proud of them all. A celebration of Pete’s 88 years of an incredible life will be held at a later date in Chippewa Bay, NY on the St. Lawrence River…a magical place where their large extended family and friends have gathered for generations. Pete will always be remembered when anyone hears the low rumbling sound of a Lyman inboard boat - a source of happiness and joy. In lieu of flowers, the family requests that donations be made to the Alzheimer's Association at https://www.alz.org/get_involved or by mail to: Alzheimer's Association, 225 N. Michigan Ave, FL-27, Chicago, Ill, 60601-7633 or Kindred Hospice at https://app.etapestry.com/onlineforms/KindredatHomeFoundationInc/KAHF.html or by mail to: Kindred Hospice, 4861 Palm Coast Parkway NW Unit 3 Palm Coast, FL 32157 Arrangements under the care of Jones-Gallagher Funeral Home, 620 E. Nona Street, Starke, Florida 32091. 904-964-6200. www.jonesgallagherfh.com

John N. Wheeler, Jr. was his given name but was always called &#8220;Pete!&#8221; On June 21, 2021, Pete peacefully passed away with his wife at his side at Ormond Manor. Pete was born and raised in Bronxville, NY, graduated from Dartmouth... View Obituary & Service Information

The family of Mr. John "Pete" N. Wheeler Jr. created this Life Tributes page to make it easy to share your memories.

John N. Wheeler, Jr. was his given name but was always called...

Send flowers to the Wheeler family.