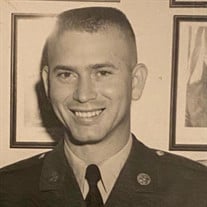 Mr. Joseph Elijah Frith age 87, of Orange Park, passed away Tuesday, October 5, 2021 at The Terrace of Jacksonville. Mr. Frith was born on December 20, 1933 in Blakely, Georgia to the late Joseph E. Frith and Hettie Esther (Deal) Frith. Joseph’s greatest devotion was to God, Family, Country, dogs Baby June and Precious, and Fat Cat. He loved being “Poppie” to his eight grandchildren and he was very close to his baby brother Tommie Frith. Next was his love and commitment to the men and women he mentored and led as a Sergeant Major in the United States Army. He was a decorated Vietnam Veteran and top Army Recruiter, earning him the key to the Virgin Islands for his exemplary recruiting, service and leadership. He was a gentleman of honor and integrity of the highest caliber, a man of few words yet extraordinary action. His work ethic was second to none, oftentimes working two or three jobs to provide for his “greatest achievements”, his girls. Upon retiring after 30 years, he spent 15 years with the United States Post Office and ran his lawn service after hours. His sense of humor was infectious. He had a soft heart for the underdog and would help anyone in need. In addition to his parents, he was preceded in death by his sisters, Mildred, Annie Mae and Ruth. Survivors are, his wife of 59 years, Josie J. (Maze) Frith, daughters, Diana Frith Lanier (Wayne) of Jacksonville, Sharon (Sherri) Lee Frith (Carlos) of Jacksonville, Laura Marie Burdetsky (Bryan) of Orange Park, brother, Tommie Frith of Lake Butler and eight grandchildren. The family will receive friends at Hope Baptist Church on Saturday, October 9, 2021 from 10:30 am to 11:00 am with funeral services beginning at 11:00 am. Interment will follow in Hope Baptist Church Cemetery with Pastor Wayne Lanier officiating. In lieu of Flowers contributions may be made to one of his favorite charities, The Humane Society, St. Jude’s or One for Israel. Arrangements are by JONES-GALLAGHER FUNERAL HOME OF STARKE 904-964-6200

The family of Mr. Joseph Elijah Frith created this Life Tributes page to make it easy to share your memories.

Send flowers to the Frith family.