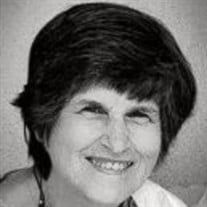 On, August 5, 2020, Joy Ann Starling Carter, of Hartwell, Georgia and Lawtey, Florida, loving and adored wife, mother, grandmother, and great grandmother, passed away at the age of 76. Joy was born on September 5, 1943 in Raiford, Florida, to Steve and Vivian Starling. On July 10, 1964, she married her high school sweetheart, Bill (Tommy) Carter. They raised two daughters, Michelle and Brenda. Joy was preceded in death by her father, Steve, sister, Barbara, and brother, Mitchell. She is survived by her husband of 56 years, Bill, daughters, Michelle and Brenda, sons-in-law, Scottie and Geoff, grandchildren, Kailyn, Samuel, and Charlie, and great-granddaughter, Adalyn, as well as her mother, Vivian, sisters, Karen and Pam, aunt, Delores, and many in-laws, nieces, nephews, great nieces and nephews, and many friends. Joy was a graduate of Bradford High School. While determining what she wanted to do as a grownup, she worked in a hospital, an insurance firm, and a local theater. After she and Bill moved to St. Simons Island, Georgia, she worked at an accounting firm. When the family moved to the Atlanta, Georgia area, she worked for former US Senator from Georgia, Mack Mattingly. Later, she had the opportunity to return to the same accounting firm to begin her role as the office manager for the Atlanta office; she remained in this position until her retirement. Joy had a servant's heart and she liked nothing more than doing things for others. With efficiency and a no nonsense attitude, she kept things, events, and especially her family and extended family organized and operating at high levels. She took care of everyone and everything so others didn’t have to. She was happiest when surrounded by her family and friends. She loved to cook, especially brownies and mac and cheese for her grandkids, grow flowers, sew, and beat others in a competitive game of cards. She loved to travel the world as much as she loved sitting quietly on her porch sipping a cup of coffee. When it comes to her grandchildren, she was their biggest fan and would drive anywhere across the state of Georgia to see their games, recitals, and performances, nothing could keep her away. A processional visitation will be held in the DeWitt C. Jones chapel at Jones-Gallagher Funeral Home on Sunday, August 9, 2020, from 12:30-1:30. Friends and family are welcome to pay respects to the family in small groups. A graveside service will be held following the visitation at Lawtey Cemetery at 2:00 p.m. Arrangements are by Jones-Gallagher Funeral Home of Starke.

On, August 5, 2020, Joy Ann Starling Carter, of Hartwell, Georgia and Lawtey, Florida, loving and adored wife, mother, grandmother, and great grandmother, passed away at the age of 76. Joy was born on September 5, 1943 in Raiford, Florida,... View Obituary & Service Information

The family of Mrs. Joy Ann Carter created this Life Tributes page to make it easy to share your memories.

Send flowers to the Carter family.