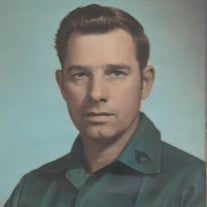 Larry (Bub) Edward Spillman passed on to be with the Lord on Tuesday, 17 May 2022. He was 85 years old. Larry was born in Hitchens, Kentucky on 9 November 1936 to Alonzo and Truby Stanley Spillman. Larry was a U.S. Army retiree and veteran of the Korean and the Vietnam conflicts. Larry retired as a Sergeant First Class in 1972. He was a police officer in Grayson and Olive Hill Kentucky, a deputy sheriff for Carter County Kentucky, and was inducted into the Honorable Order of Kentucky Colonels on 31 May 1984 by Governor Martha Layne Collins. Larry was also a member of the Veterans of Foreign Wars, the American Legion, and a founding sponsor of the National Museum of the United States Army. Larry was preceded in death by his wife, Celia Katherine (Doverspike) Spillman, his eldest son, Michael R. Spillman, his father and mother and his three brothers: Lloyd, Gary and Barry Spillman He leaves behind four children: Cheryl Craig of Grayson, KY; Gayle May of Middleburg, FL; Katherine Spillman of Keystone Heights, FL; and Stephen Spillman of Middleburg, FL. Surviving grandchildren include, Robert Michael Adkins, James Michael Spillman, Soner (Stephanie) Acar, Hakim Acar; Zachary (Tiffany) Craig, Caleb (Alexis) Craig; C Sean May; Craig Spillman, James Spillman, Ben Ackman, Sarah Ackman, Hannah Ackman. Great Grandchildren include: Caroline Craig, Everly Craig, Laney Craig, Adalyn Craig, Riley Craig, Lucas Xavier Barfield, Anastasia Raye Spillman, Zandria Ackman, and Brantley Permenter. Larry and Celia were married on June 9th, 1958. They were married for 63 years until Celia passed away on 29 March 2022. He was a kind and loving husband as well as a great father and grandfather. Prior to his health declining, he enjoyed wood working and traveling. Aside from his wife and family, Larry was most proud of being a Soldier, a Veteran and his service and retiring from the military. He will be sorely missed by all who loved and knew him. He lived life to its fullest and would tell you that he never was bored at any time while living it. This isn’t goodbye though, Larry Spillman was a born again Christian and him, his family, and his friends will be reunited one day in the Kingdom of Heaven. In lieu of flowers, it is requested that donations be made to a national or local veterans organization or, the National Museum of the United States Army at Fort Belvoir, Virginia.

Larry (Bub) Edward Spillman passed on to be with the Lord on Tuesday, 17 May 2022. He was 85 years old. Larry was born in Hitchens, Kentucky on 9 November 1936 to Alonzo and Truby Stanley Spillman. Larry was a U.S. Army retiree and veteran... View Obituary & Service Information

The family of Mr. Larry Spillman of Keystone Heights created this Life Tributes page to make it easy to share your memories.

Larry (Bub) Edward Spillman passed on to be with the Lord on...

Send flowers to the Spillman family.