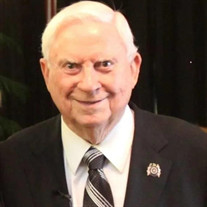 We regret to announce Louie Lee Wainwright, Sr., former Secretary of Corrections, State of Florida, and Board President of the Corrections Foundation, has passed away in peace on December 23, 2021, in Tallahassee, Florida. Born on September 11, 1923, in Lawtey, Florida, he remained true to his home state, serving Floridians his entire career. His 98 years were extraordinary. After serving in the US Navy during World War II, he returned to Lawtey. Drawn to public service, Secretary Wainwright began his career in 1947 as a Gainesville Police Officer. In 1952, he joined what was then titled the Division of Corrections as a clerk in the inmate identification unit, a precursor to Classification, at Florida State Prison, in order to learn more about fingerprinting. This launched his long-standing corrections career as he was quickly promoted to Chief Security Correctional Officer. In 1955, he sustained a bullet wound to the leg during an attempted prison escape, in which Assistant Superintendent James G. Godwin was mortally wounded and Correctional Officer Les Dobbs was wounded. Five years later he was appointed Assistant Superintendent at Avon Park Correctional Institution, later becoming Superintendent. In 1962, Governor Farris Bryant appointed Wainwright to Chief Administrator of the entire corrections system. He remained Director and then Secretary of Florida’s Department of Corrections for a quarter-century, retiring from the position on December 31, 1986. Wainwright is most famous for being named the respondent in two US Supreme Court cases. The first was Gideon vs Wainwright, in which the United States Supreme Court held that the Sixth and Fourteenth Amendments guarantee a right of legal counsel to anyone accused of a crime. Time magazine called the Gideon decision one of the ten most important legal events of the 1960s. Gideon remains one of the most familiar names to students of habeas corpus law. He is also remembered for the Ford vs Wainwright decision, in which the United States Supreme Court approved the common law rule prohibiting the execution of the insane. Louie Wainwright, Sr., had an enormously satisfying career, one he would not have traded for any other. He believed that in no other position would he have had the freedom and obligation to solve problems and help people on a daily basis. He would often say it was his calling. Whether helping those who were incarcerated or supporting the dedicated staff across the prison system, his passion for human rights always guided his decisions, regardless of political consequences. Mr. Wainwright maintained support through six administrations: Governors Bryant, Burns, Kirk, Askew, and Graham. During his tenure, he sustained three agency reorganizations. Having received his Master’s Degree in Criminal Justice from Nova Southeastern University, he later served as a visiting faculty member there. He was acknowledged as the Dean of American Correctional Administrators. He was the longest-serving Correctional Secretary or Director in the United States. He has received the American Correctional Association’s highest tribute, the E.R. Cass Award for his outstanding service. His efforts in support of accreditation in Florida and nationwide earned him the 1986 Accreditation Achieved Award from the Commission of Accreditation for Corrections. His legacy includes an enduring chapter of Florida’s history for ensuring appropriate operations, employee treatment, offender program quality, and inmate health and safety as well as his leadership within the American Corrections Association (ACA). He was the driving force in the early to mid-seventies for the ACA’s national campaign to establish the Corrections Accreditation Commission. Florida’s Institutions, then totaling 24, were the first in the nation to achieve accreditation in 1981. In 1984, the Florida Department of Corrections’s Central Office earned its accreditation, making Florida the first correctional agency in the nation to be fully accredited. Always humble, always polite, and often soft-spoken, his quiet confidence and behind-the-scenes leadership style spurred the shift in corrections philosophy away from centuries of barbarian treatment of those incarcerated. As Florida’s corrections leader he established prisoner’s education and job training and pushed for transparency of the entire system. Upon state retirement in 1986, he launched Wainwright Judicial Services and began consulting corrections as a global font. He traveled to China and Russia as part of the Citizens Ambassador Program of People to People International. As a member of the Criminal Justice Delegation, a non-profit group established by President Eisenhower to bridge the world, he was instrumental in facilitating international understanding. The highlight of his prestigious career was his international corrections work, where he taught lessons learned and pioneered from Florida’s correctional system to European Corrections Professionals in Austria, Poland, Sweden, and the Republic of Ireland. He wasn’t a fancy dresser. He wasn’t a fancy speaker. He never had a fancy car. He just was a person who appreciated the things he had, didn’t want for more, and wanted to ensure those around him excelled, often when their successes might not have been his. He appreciated his opportunities and was often humbled by his accomplishments and what others thought of him and what he meant to them. He often said, “Not bad for a country boy from Lawtey.” In 2001, he was appointed President of the Corrections Foundation, leading the effort to increase the Foundation’s membership from 5,000 to a high of 15,000, and providing over $9.2 million to over 10,000 FDC employees and contractors. Secretary Wainwright was preceded in death by his first wife Edna Edwards Wainwright (1998) and second wife Anabel P. Mitchell (2019); his sons Louie Wainwright, Jr (2013) and Michael Wainwright (2018); and his eight siblings, six of whom were veterans of World War II. He is survived by his daughter Sherry; seven grandchildren, Joshua, Dee Ann, Tara, Scott, Louie III, Shawna, and Amy; ten great-grandchildren, Alexandria (Joshua); Storm (Dee Ann); Holden and Hunter (Scott); Christine, Gabriel, Michael and Dakota (Shawna); and Alyssa and Darlene (Amy). He and his beloved Anabel Mitchell, a corrections leader in her own right, lived in a Tallahassee retirement community for the sweetest years of their lives.

We regret to announce Louie Lee Wainwright, Sr., former Secretary of Corrections, State of Florida, and Board President of the Corrections Foundation, has passed away in peace on December 23, 2021, in Tallahassee, Florida. Born on September... View Obituary & Service Information

The family of Mr. Louie Lee Wainwright Sr. created this Life Tributes page to make it easy to share your memories.

Send flowers to the Wainwright family.