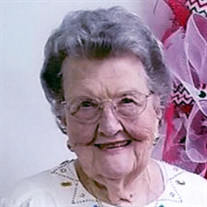 Mrs. Margaret “Charlotte” Frees age 97, of Gainesville formerly of Starke, passed away Tuesday, August 4, 2020 at Haven Hospice E.T. York Care Center in Gainesville. She was preceded in death by husband, Victor Frees, sisters, Elizabeth Vincent and Ethel Blalock and her granddaughter, Vanessa Powell. Survivors are: her children, Donald Frees (Claudette) of Melrose, Vicki Powell (Bill) of Starke, Kathy Whitehead of Louisville, KY, her caregiver, Twilla Collins of Gainesville, three grandchildren, Chris Powell of Austin, TX, Ron Whitehead of Louisville, KY & Jennifer Frees of Melrose, FL; four great grandchildren, several nieces, nephews and cousins. Charlotte was born in Jacksonville on July 25, 1923 to the late Fred and Margie (Fowler) Pancoast and was raised in Jacksonville Beach. She graduated from Duncan U. Fletcher High School, Santa Fe Community College and the University of Florida. Charlotte moved to Starke in 1949, lived in Melrose for a few years in the 1980’s, enjoyed the Smoky Mountains while living with her daughter in Bryson City, NC several months a years for 11 years and then moved to Gainesville, Florida in 2014. She was a longtime member of the First United Methodist Church where she was an active member of the choir. She also attended the Bryson City United Methodist Church. Charlotte was blessed with a strong solo soprano voice and was the lead in many local musical productions in her youth. Besides being a wife, mother, and homemaker, she went back to work fulltime and eventually started college by taking night classes and finished her bachelor’s degree at the age of 50. She began her teaching career at Starke Elementary and remained there until retirement. Charlotte often told stories of how life had changed over the years. She remembered scrimping and bartering during the Great Depression, rationing during World War II, viewing news reels at the movies, listing to serials on the radio, and not having television, air-conditioning, computers, cellphones or Internet. She was outgoing, active and loved to travel with family, work in the yard and sew. She was an amazing person and will be missed by family and friends. Memorial services will be held on Monday, August 10, 2020 at 11:00 am in the DeWitt C. Jones Chapel of Jones-Gallagher Funeral Home with Mr. Bill McRae officiating. Interment will be at a later date in Eliam Cemetery. In lieu of flowers contributions may be made to the First United Methodist Church of Starke Choir, P.O. Box 157, Starke, FL 32091. Arrangements are by JONES-GALLAGHER FUNERAL HOME OF STARKE www.jonesgallagherfh.com.

The family of Mrs. Margaret "Charlotte" Frees created this Life Tributes page to make it easy to share your memories.

Send flowers to the Frees family.