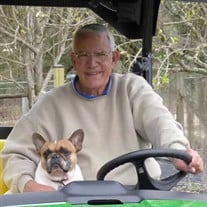 Dr. Mark M. Frost, 73, passed away quietly in his sleep on January 20, 2022, following a lengthy illness. He was surrounded by his loving family. Mark was born in Jacksonville on March 4, 1948. He attended public schools in Jacksonville until his mother’s death when he was 15, when he transferred to Washington, DC, to finish high school while living with his Uncle Dick. Mark attended the University of Florida for undergraduate work, and Texas A&M University College of Veterinary Medicine. He worked with Dr. John Plant in the Herschel Animal Clinic from his Vet School graduation until his early retirement due to illness in 2006. His love of people and devotion to the health of animals made him a most special veterinarian to many. Mark was also very focused on civic activities as well as a dedicated lifelong Gator fan. He was a lifelong Rotarian, serving on many committees and a past president of the Westside Rotary Club. He served on the Greater Jacksonville Fair Board for many years, including being a past president of the Greater Jacksonville Fair (1994 - 1996). He was also a past President of the Jacksonville Chapter of the Kappa Alpha Order, a past president of the Beta Zeta Housing Corporation and a member of the Kappa Alpha Court of Honor. Mark was an avid outdoorsman, enjoying boating, fishing, and hunting, virtually all of his adult life. Mark was gregarious and a friend to all. He remembered all his friends and was always glad to see them. He loved to listen to stories and tell his own. He hated casseroles and asked that that be included in his obituary. Mark was a Christian and appreciated all that the Lord provided, especially his loving family and friends. Mark played poker in the Timuquana Tuesday-night “prayer meeting” for decades and will be remembered among his friends there for his laughter and stories. Mark married Tommye Morehead in Bryan, Texas, after graduation from Vet School in 1983. Mark and Tommye have two children, Elizabeth “Beth Anne” Frost and Kevin Edward Frost. Both went to the University of Florida for undergraduate and master’s degrees. Beth Anne followed in her dad’s footsteps and earned her DVM from Auburn University College of Veterinary Medicine, and now practices at her two clinics, Pottsburg Creek Animal Hospital in Jacksonville, and Nassau Animal Hospital in Yulee. After receiving his BS and ME in civil engineering at UF, Kevin went on to Texas A&M and received a further MS in ocean engineering. He now works for Xylem in St. Petersburg as a sales engineer and project manager. Mark’s greatest wish was to be a grandfather, an event accomplished with the birth of his twin grandchildren, Ellis Elizabeth and Graham Everett Frost, on August 1, 2020, to Beth Anne. They were truly the light of his life! Mark is survived by his wife of 39 years, Tommye Frost, and both children, Beth Anne (Ashlie) of Jacksonville and Kevin Edward (Brenna) of St. Petersburg; two grandchildren; one sister, Barbara Woolfe of Nocatee; and one brother, John “Skip” Frost (Terry) of Bartow; and several nieces and nephews who, along with many friends and acquaintances, are profoundly saddened by his passing. A celebration of Mark’s life will be held at his residence 8136 Alderman Road Melrose FL, 32666 on Saturday, April 30, 2022 from 5-8 P.M. The family will be accepting any family and friends that would like to come out. Remembrances may be made to the Dr. Mark M. Frost Memorial Endowed Scholarship in the Auburn University College of Veterinary Medicine or a charity of your choice. Remembrances to the scholarship endowment may be forwarded directly to Ms. D. Turner, AUCVM, 317 South College Street, Auburn, AL 36849. Arrangements are by JONES-GALLAGHER FUNERAL HOME, 340 E. Walker Dr. Keystone Heights, FL 32656. (352) 473-3176 www.jonesgallagherfh.com

Dr. Mark M. Frost, 73, passed away quietly in his sleep on January 20, 2022, following a lengthy illness. He was surrounded by his loving family. Mark was born in Jacksonville on March 4, 1948. He attended public schools in Jacksonville until... View Obituary & Service Information

The family of Dr. Mark Malcolm Frost, 73, of Melrose created this Life Tributes page to make it easy to share your memories.

Send flowers to the Frost family.