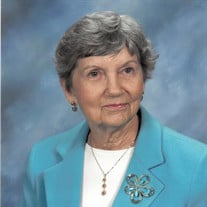 Mrs. Mary (Edwards) Mixon Rahn passed away on Wednesday, March 16, 2022 at Haven Hospice Custead Care Center in Orange Park, at the age of 99. Mary was born on August 17, 1922, in Lawtey to the late William Howell and Mamie Lou (Moore) Edwards. She was the third of six children. In 1939, Mary graduated from Bradford High School in Starke. Upon graduation, she moved to Jacksonville to attend Jones Business College. While living there, she met Rex W. Mixon at a church gathering, and married him in July 1941. They were married more than sixty years and had three sons. Following the death of Rex in 2003, Mary continued working as a bookkeeper. For many years, Mary was a member of St. Johns Presbyterian Church in Jacksonville, where she was an active member of the church choir and enjoyed Bible Study Fellowship. She was also a member of the Timuquana Country Club in Jacksonville, where she was an avid golfer and champion “Putter.” In her free time, Mary enjoyed playing the piano, playing bridge, and spending time with family and friends. In 2005, Mary became reacquainted with her high school beau, Thompson “Buster” Rahn, whom she married in June 2006. Upon marrying Buster and returning to Bradford County in 2006, Mary became a member of the First United Methodist Church of Starke. Mary is survived by her children: Rex Mixon, Jr. (Susan) of New York, NY; Larry Mixon (Reba) of Silver Springs; Mark Mixon, Sr. of Jacksonville; Charles Rahn of Orlando; Cynthia Rahn Bollini (Rich) of Jacksonville; Carol Louise Rahn Rutland (Lewis) of Winter Park; and her sister Ada Edwards Reddish (Drew) of Starke. She also leaves behind her grandchildren: Jonathan J. Mixon; Renee Mixon Boatwright (Barry); Christine Mixon York (Will); Timothy Mixon; Christopher Mixon (Ali Kittle); Mark Mixon, Jr.; JanAlex Mixon; Tiffaney Rahn Eastham (Tye); Joe Bollini (Kristen); Christopher Bollini; Brooke Rutland Hansen (Steve); Jennifer Rutland Shehan (Chris); and 12 great grandchildren. A funeral service will be held on Saturday, March 19, 2022 at 10:00 am at the First United Methodist Church of Starke with Pastor Michael Moore presiding. There will be a visitation prior to the funeral beginning at 9:00 am. Interment will follow at Crosby Lake Cemetery. In lieu of flowers, the family requests donations be made to the First United Methodist Church of Starke, or to Haven Hospice in Gainesville. The family wishes to thank the staff of the First United Methodist Church and the members of the Starke community who provided loving care and support over the years.

The family of Mrs. Mary Mixon Rahn created this Life Tributes page to make it easy to share your memories.

Send flowers to the Rahn family.