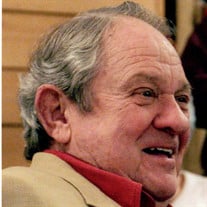 Maxie Carter, Jr. went to be with his Lord on July 25, 2020 at the age of 91. Maxie was born on December 23, 1928 to Effie and Maxie Carter, Sr. in Clay Hill, Florida where he joined a sister, Jewell. He graduated from Bradford High School where he was a football standout and then attended the University of Florida. Maxie was married to his high school sweetheart, Kathleen “Kitty” Judd for 53 years. They were members of the First Baptist Church of Starke. Maxie served in the Florida National Guard for 8 years and was employed by The Florida Power and Light Company for 25 years. He also owned and operated Carter Enterprises. Maxie was elected to the Bradford County Commission in 1976 and served 4 consecutive terms, a 16 year total. Maxie enjoyed hunting and fishing as well as boating and waterskiing on Kingsley Lake, where he spent much time with his family. Maxie loved his community, as evidenced by his leadership positions in the Lions, Elks, Rotary, Masonic and Shriners organizations. Maxie is preceded in death by his parents, Maxie Carter, Sr. and Effie (Starling) Carter, his sister, Jewell Carter Johns, his wife Kathleen “Kitty” Judd Carter of Starke, niece Jeannie Larkin of Lake Butler and his granddaughter, Rayma Jenkins of Tampa. Maxie is survived by his two sons, Brad (Valerie) Carter of Starke and Keith (Diane) Carter of Tampa, his nephew, who was more like a son, Carlton (Nadine) Faulk of Lake Butler and 8 grandchildren: David Carter, Patrick Carter, John Carter, Elizabeth (David) Goldin, Julie (Bret) Watson, all of Tampa, Matthew Carter of Deerfield Beach, Austin (Erin) Carter of Kingsley Lake, and Ben Carter of Starke. In recent years, he was blessed with the love of 6 great grandchildren: Mia Carter, Bailey, Adelyn and Kingsley Watson, and Jude and Julia Goldin, all of Tampa. Private graveside services were held at Crosby Lake Cemetery on Saturday, August 1, 2020 at 2:00 PM with outstanding Masonic representatives performing rites and Army National Guard conducting military honors. All services were officiated by Pastor Ken Weaver and music was provided by Ben Carter. Arrangements are by JONES-GALLAGHER FUNERAL HOME OF STARKE www.jonesgallagherfh.com.

Maxie Carter, Jr. went to be with his Lord on July 25, 2020 at the age of 91. Maxie was born on December 23, 1928 to Effie and Maxie Carter, Sr. in Clay Hill, Florida where he joined a sister, Jewell. He graduated from Bradford High School where... View Obituary & Service Information

The family of Mr. Maxie Carter Jr. created this Life Tributes page to make it easy to share your memories.

Send flowers to the Carter family.