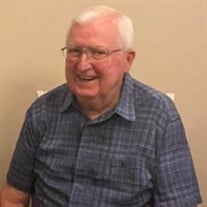 Robert (Bob) E. Smith, passed away peacefully on February 4th, 2021 at Haven Hospice E.T. York Care Center in Gainesville, Florida. Mr. Smith is survived by his wife of 65 years, Amanda Wilkinson Smith, his daughters Cindy White, Margaret (Brian) Johns, Traci Wilson and Sue Ellen Smith (Bruce Ritchie), his grandchildren Aimee Thornton (Travis Moore), Brianne Humphrey (Trenton), and Matthew Wilson, his great grandchildren Haydn Sanford and Austyn Thornton, his brother William Eugene Smith and many other extended family members which he loved dearly. He was preceded in death by his parents David and Eva Smith, his brother Hubert Smith (Flossie) and his son-in-law Larry White. He was a proud veteran of the United States Navy and served for 22 years. After retiring as a Lieutenant in 1974, he and his family returned to Bradford County, his wife’s hometown. Mr. Smith was employed with the Florida Department of Corrections. He was also a tax advisor at H&R Block in Starke for many years. Mr. Smith loved long rides in the country, watching Gator football, league bowling and spending time with family. He will be remembered for teasing the kids, telling stories about his days in the Navy, bird watching in the backyard and enjoying a good meal. Our beloved “Papa Smith” will be truly missed. Mr. Smith will be interred through a private family ceremony at the National Cemetery in Jacksonville on February 15th. In lieu of flowers, please send donations to Haven Hospice, 4200 NW 90th Blvd., Gainesville, Florida 32606. “Jack of all trades, Master of none.” Arrangements are under the care of JONES-GALLAGHER FUNERAL HOME, 620 East Nona Street, Starke, FL 32091. (904) 964-6200. www.jonesgallagherfh.com

The family of Mr. Robert E (Bob) Smith created this Life Tributes page to make it easy to share your memories.

Send flowers to the Smith family.