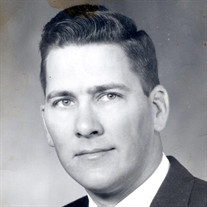 Mr. Robert M. “Bob” Wasdin age 86, passed away Saturday, February 22, 2020 at his residence in Middleburg. He was born March 10, 1933 in Graham to the late Hiram and Bessie (Abernathy) Wasdin and graduated from Bradford County High School in 1951. During his high school years, his father became ill and Bob was faced with the decision of dropping out of school or starting work on the family farm, starting early before school and continuing after he got home. He decided to begin his days in the dark, early hours using a light to hook up tractors and farm equipment. Many times plowing until it became dark in the evenings and he was also responsible for taking his farm produce to Jacksonville and selling it at the Farmers Market. Bob somehow found time to play center for the Bradford High School Tornadoes football team. Following graduation, he went to work in Jacksonville before joining the Army Reserves. He later joined the Army and was assigned to Interpretative Photography Training where he began making maps by identifying ground objects. After leaving the Army he studied Business Administration at the University of Florida, graduating in 1960 and accepted a position at Massey Business College. He was elected Chairman of North Jacksonville Chamber of Commerce, Commissioner of Mohawk Division of North Jacksonville Boy Scouts and became Vice President of Internal Affairs for Massey in 1971. In 1972 he resigned from Massey to form R.M. Wasdin Construction, building many area homes, prior to his retirement in 1993. He was an active member of the First Baptist Church of Middleburg, serving as an usher and enjoying their many building projects. Survivors are: his wife of 61 years, Mary (Johnson) Wasdin of Middleburg, sons, Matthew Wasdin (Catherine) and Robert J. Wasdin, grandchildren: Ross (Brittany), Logan (Christen), Kiera, Samantha, and Jennifer. Also left are great grandchildren, Kaden, Lucas, Bristol and Tenoa. The family will receive friends at DEWITT C. JONES CHAPEL OF JONES-GALLAGHER FUNERAL HOME on Thursday, February 27, 2020 from 5:00 P.M. to 7:00 P.M. Graveside funeral services will be on Friday, February 28, 2020 at 3:00 P.M. in Santa Fe Cemetery with Pastor Todd Jones Officiating. Arrangements are by Jones-Gallagher Funeral Home of Starke 904-964-6200 www.jonesgallagherfh.com.

The family of Mr. Robert M "Bob" Wasdin created this Life Tributes page to make it easy to share your memories.

Send flowers to the Wasdin family.