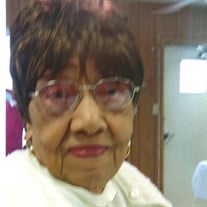 Sarah Lee (Kareem) Brundage, AKA Snapper (Bit Bit) was born to the late John Henry and Sarah Gilmore on May 20, 1923 in Sparta, Georgia. The youngest of two daughters due to the death of her mother, Sarah (Snapper) and her sister Margaret (Ree) moved to Jamaica Queens New York to live with her grandmother Lizzie Collier, and her aunt Sharefah (Collier Cora) at the ages of 6 and 8. Sarah was educated in the school system of New York. Afterwards, working different jobs; her main employment was working at Dover Nursing Home as a heath care aide, retiring after 30 years. In 1968, she met and married Frank Brundage, who had two daughters Donna Brundage (deceased) and Dorothy Brundage; she helped raise and care for both in Brooklyn, New York. Sarah never had any biological children of her own, but was very nurturing to her cousin Anniebelle’s eight children. The closeness between the two were more like sisters therefore she was known to the family as “Aunt Snapper”. Sarah was very tentative also to her husband Frank and sister Margaret, who were both ill and preceded her in death. After their demise, Sarah moved to Florida to be close to her cousin Anniebelle and family, leaving some close friends who as of this day stay in touch as much as possible. Sarah (Snapper) leaves many cousins/nephews and nieces to cherish her memories along with her loving friends from New York, Mary Brooks and family; Rahkiah Eason; Anniebelle James; a very much loved godson Larry Brooks (Satydra) of Maryland who she joyfully refers to as “moo-moo” and the community of Speedville, Florida; The family will accept friends and family for a visitation held on Friday, April 29, 2022 from 5pm – 7pm at the Jones-Gallagher Funeral Home Chapel. Services will be held Saturday, April 30, 2022 11:00 A.M. with pastor Elder Harold Wanton, Sr. presiding with Internment to follow at Speedville Cemetery in Melrose. Arrangements are by JONES-GALLAGHER FUNERAL HOME, 340 E. Walker Dr., Keystone Heights, FL 32656. 352-473-3176.www.jonesgallagherfh.com

Sarah Lee (Kareem) Brundage, AKA Snapper (Bit Bit) was born to the late John Henry and Sarah Gilmore on May 20, 1923 in Sparta, Georgia. The youngest of two daughters due to the death of her mother, Sarah (Snapper) and her sister Margaret (Ree)... View Obituary & Service Information

The family of Mrs. Sarah Lee "Snapper" Brundage age 98 of Speedville created this Life Tributes page to make it easy to share your memories.

Send flowers to the Brundage family.