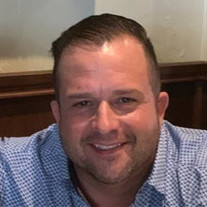 “Trey” Lewis Earl Turner, III, 46, of Starke, Florida passed away unexpectedly due to an acute illness on February 13, 2021. Trey was born in Lake City, Florida on September 5, 1974 to “Pete” Lewis Earl Turner, Jr and Alene Robinson Turner. He graduated from Union County High School in 1992. Trey was loved & cherished by many. Everyone that knew Trey loved him. His passing is a devastating loss to his family, friends & coworkers. He was a charismatic fun-loving son, brother and uncle. He had a free spirit and a kind and loving heart. He enjoyed spending time with his family and friends and going to the beach. He enjoyed his work as a welder at Matrix Power Southeast where he was described as a most valued employee who could be counted on to take that extra step. Trey is survived by his parents Pete & Alene Turner; his siblings Angie (Vince) LoPresti, Barbara (Russ) Hyden, Terry (Lynn) Bacon, Melanie (Tim) Chastain; 8 nieces & nephews; Hanner Miller, JoAnna Keel, Katie Dodd, Matthew Mosher, Jarrod Bacon, Mary Angela LoPresti, Jordan Bacon, Logan Mosher & 9 great nieces & nephews. Family will receive friends for visitation & viewing on Monday, February 22, 2021 at 10:00 AM at Jones-Gallagher Funeral Home, 620 Nona Street, Starke, FL 32091 with a graveside service at 11:30 AM at Santa Fe Cemetery, SW 70 Ave, Hampton, FL 32044. Arrangements are under the care of JONES-GALLAGHER FUNERAL HOME, 620 E. Nona St., Starke, FL 32091. (904)964-6200. www.jonesgallagherfh.com

The family of Mr. "Trey" Lewis Earl Turner, III, 46 of Starke created this Life Tributes page to make it easy to share your memories.

Send flowers to the Turner, family.