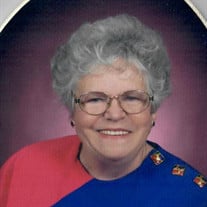 Mrs. Vera Louise Hodgson Williamson 85 of Jacksonville passed away at her home in Melrose Tuesday, December 8, 2020. She was born August 10, 1935, in Tampa to Linnaeus and Mary Birdie (Fowler) Hodgson. Following high school graduation she immediately became employed with Delta Airlines as a stewardess. A few years later she started her career as an Insurance Writer until her retirement many years later. Mrs. Williamson was a sports enthusiast especially when it came to golfing and watching the University of Florida and Jaguars football games. She was a longtime member of Kernan Baptist Church in Jacksonville and was known for her strong Christian values. She also enjoyed knitting, sewing and crafts and was in the Senior Choir group that would travel to nursing homes and sing and still at the age of 80 she was volunteering at the Senior Center helping others. In addition to her parents she was also preceded in death by her husband of 49 years Robert Williamson. Left behind are her three children Michelle Williamson and Wayne Williamson both of Melrose and MSgtUSAF Paul Eric Williamson and his wife Diedra of Enid, OK, and a brother Linnaeus Jr. “Steve” Hodgson of California. She was lovingly called “Grandma” by six granddaughters Alisa Dalton, Erica Williamson, Taylor Williamson, Tara Dunham, Brooke Hammond and Brittany Filing and five great-grandchildren Dylan Dunham, Kohen Dalton, Kinleigh Hammond, Harper Hammond and Skylar Kulikowski. Funeral services for Mrs. Williamson will be held Tuesday, December 15, 2020, at 12:00 p.m. in Freedom Baptist Church with Pastor Jason Stephens officiating. Viewing will begin at 10:00 a.m. Graveside services will follow at 3:00 p.m. at Newnansville Cemetery in Alachua. Arrangements are by JONES-GALLAGHER FUNERAL HOME, 340 E. Walker Dr., Keystone Heights, FL 32656. (352)473-3176. www.jonesgallagherfh.com

The family of Mrs. Vera Louise Hodgson Williamson created this Life Tributes page to make it easy to share your memories.

Send flowers to the Williamson family.