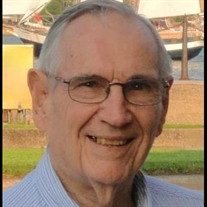 William (Bill) Eugene Frazel, 90, Davie, Florida, passed on January 18, 2021. Bill was born to Jerome and Anne Frazel on September 3, 1930, in Miami, Florida. He graduated from St. Theresa High School in Coral Gables in 1948. This St. Theresa community was central to his life and from it he cemented his Catholic faith and maintained life long friendships. Bill served in the U.S. Army as a Corporal from 1951-1953. One of the highlights of his service was his visit to the Sanctuary at Our Lady of Lourdes. He returned to Coral Gables and received a Degree in Business from the University of Miami in 1955. He married Maureen Sweeney in 1956 and they lived together in Fort Lauderdale and Davie, Florida until Maureen’s passing in 2018. Bill moved to North Florida in 2019, along with his beloved caregiver Marcia Samuels. He enjoyed his final years surrounded by family and nature at his son James’ residence in Grandin. Bill was known for his love of nature that was established in his early years with fishing and lobstering off the seawall near his family home in Coconut Grove, and later when he could find a vehicle to get out into the Everglades. For many years he was an avid birder and could be found pulling off the road while spotting another species. He shared a passion for horticulture and gardening with his wife Maureen, which started with searching for rare orchids in the Everglades, cultivating rare tropical trees, and most predominant, his enduring passion for bromeliads. That passion led him to membership and presidencies of the Bromeliad Society of Broward County and Bromeliad Society International. Bill’s professional life was dominated by his ownership of Lee & Frazel, Inc. founded by his father. He also supported his wife, Maureen’s business ventures. His Catholic faith led him to a lifetime of community service. He provided service to those in need on a nearly daily basis through his support of the St. Vincent de Paul Society, at both Our Lady Queen of Martyrs, where he raised his family and St. Bonaventure, where he was a founding member. He held leadership roles at both parishes. He also shared his faith as a CCD teacher. Bill was very active in his children’s lives and was always in attendance at their games and events. He continued this with his 8 grandchildren. He is survived by three children: Denis Frazel (Rowena) of St. Augustine, Florida, Kathleen White (Chuck) of Oakland, California, and James Frazel (Ellie) of Grandin, Florida. He is remembered by his eight grandchildren: Dirk, Marea, Julia, Keelin (Denis), Conrad, Jeremy (Kathleen), and Marlee and Alie (James). He always tried to put a smile on your face and there is rejoicing as the saints welcome him. A funeral mass will be held on Friday, January 22, 2021, 11 a.m. at St. Monica Church, Palatka, Florida. In lieu of flowers, the family requests that donations be made to the St. Vincent de Paul Society, St. Bonaventure Church, 1301 SW 136th Ave. Davie, FL 33325.

The family of Mr. William Eugene Frazel 90 of Melrose created this Life Tributes page to make it easy to share your memories.

Send flowers to the Frazel family.